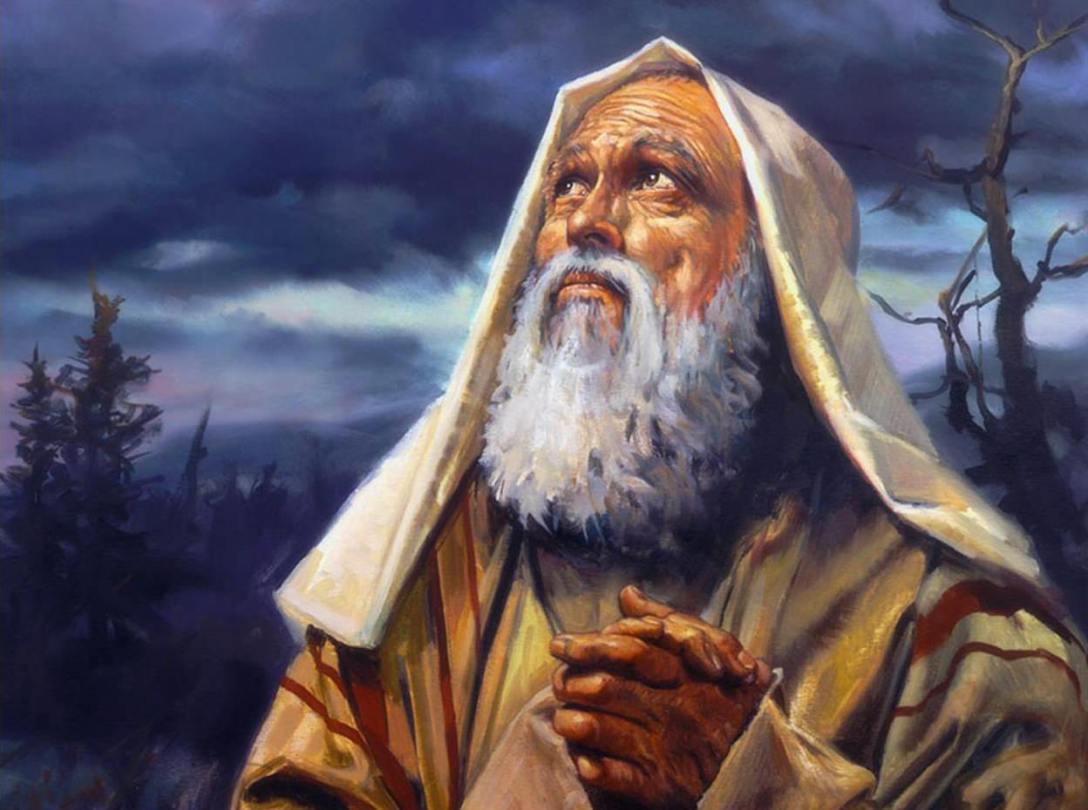 My pastor, like many, encouraged our congregation to read through the Bible this year. I am going through it at a painfully slow pace, but I will get to the end…just maybe not this year. We will see about that. I have decided that I will periodically offer some of my thoughts and observations on my reading and I invite you to share your thoughts in the comments section at the end of the post or on Facebook or Twitter.

I want to start with some observations on the story of Abram (he will be later called Abraham). This story fascinates me because it is where the opening story of the Bible emerges from the shadowy fog of prehistory into the realm of a history that is more verifiable. It also the place where a theological shift happens. The first two chapters of the Bible start off gloriously with a perfect creation. By the third chapter of Genesis things start unraveling as Adam and Eve make their fateful choice, and humanity starts a downward spiral of rebellion, murder, sexual sins, and deceit that results in humanity being destroyed in a cataclysmic flood There are hints in those chapters that all of creation, not just humanity, is fallen from it’s original perfect state. Eventually we reach the point where the story hones in on one individual -Abram- whom God will choose to begin the process of redeeming and restoring the now broken creation.

We meet Abram living with his wife, father, and brothers in ‘Ur of the Chaldeans’. (While the view that Ur is in southern Mesopotamia is predominant, some scholars think it is actually in modern day Turkey. I think I learn toward this second view myself.) Abram is introduced (Genesis 11:26) as the son of Terah, who has begun a journey from Ur to Canaan with Abram, Abram’s wife Sarai, and his grandson Lot. For unknown reasons the family stops at Harran in what is now southern Turkey (there doesn’t seem to be any dispute on the location of Harran). Then at the beginning of Genesis chapter 12 we read of Abram’s call by God to “Go from your country, your people and your father’s household to the land I will show you”. Abram sets out from Harran at age 75 and begins the journey to Canaan. Once he reaches ‘the great tree of Moreh at Shechem”, “The Lord appeared to Abram and said, “To your offspring I will give this land.” (Genesis 12:7)

I want to slow down here and examine a few aspects of the story. I am always interested in the ‘behind the scenes’ aspects of the Bible. What prompted Abram to follow God? How did he come to know God at all? What might have been going through his mind? The Jewish historian Josephus gives a fascinating account in which he describes Abram as being,

“a person of great sagacity, both for understanding all things and persuading his hearers, and not mistaken in his opinions; for which reason he began to have a higher notions of virtue than others had, and he determined to renew and to change the opinion all men happened then to have concerning God; for he was the first that ventured to publish this notion, That there was but one God, the Creator of the universe”.

Josephus goes on to describe that Abram came to this monotheistic conviction by observing “irregular phenomena that were visible both at land and sea, as well as those that happen to the sun and moon, and all the heavenly bodies” and noting the inadequacy of worshipping these phenomena and celestial bodies. Eventually Abram’s beliefs created a ‘tumult against him’ from the local Mesopotamians which prompted him to leave on his journey to Canaan. (Josephus Book 1, Chapter 7) While this account is not in the Bible, neither does it contradict the Biblical account. Scholars do know that moon-worship was important at Harran, and the Mesopotamians worshipped many gods, celestial and otherwise. In Joshua 24:2 Joshua says this to the Israelites, “This is what the Lord, the God of Israel says: Long ago your ancestors, including Terah the father of Abraham and Nahor, lived beyond the Euphrates River and worshiped other gods.” While no explanation is given as to how it happened, it is clear that Abraham (Abram) forsook the polytheism of his father, ancestors, and his culture to follow and worship Yahweh. It is plausible that the reason for this is that Abram was, in fact, a scholar/astronomer who began to question the polytheistic explanations of the world around him, and through that began to know and follow the true God.

Why does this matter? As I said before, part of it is I am simply fascinated by this sort of historical look at Biblical stories. I realize it is a bit speculative, but if it is really true that Abram was a historical person, then I want as full a picture of that reality as I can get. But it is also important to our understanding of faith. Faith is often discussed as if it is an irrational ‘leap’ with no rhyme or reason. I hear people mention how God has called them do ‘crazy’ things, and sometimes it seems the more crazy they think it is, the more convinced they are it is God calling them. I have always been a little skeptical of this approach, as it doesn’t quite fit the view of faith that I glean from the Bible.

We have to realize that the Bible doesn’t always attempt to fill in the details of what happened, or provide every bit of background. It usually has a big picture focus on who God is and how he has worked in the redemptive narrative of history. From the perspective of the Biblical author of Genesis (often attributed to Moses), the importance of the story was that it was God who called, and Abram who obeyed, and thus God began the plan to bless all peoples on earth. But if we take this as the whole story, we can come away with the idea that without any preceding events God suddenly asks Abram to leave his homeland and everything he knows and boom! Instantly Abram obeys with nary a doubt in his head, whistling ‘How Great Thou Art” as he walks out the door. But I just don’t think this is how it actually happens.

I cannot be certain that Josephus account is accurate, as any time we are dealing with the distant past there are a lot uncertainties and ambiguities. I do think it seems plausible, and provides an insight into what might have been going on in Abram’s mind that led him to abandon polytheistic idolatry, follow a new God, and uproot his family to an unknown destination. The are many ways God speaks to us, and Abram feeling a call to move may have been accompanied by hostility from his neighbors over his disbelief of the local deities. There may have been other factors as well. The Bible mentions that Abram’s brother Haran died in Ur prior to the journey, and Jospehus records that their father Terah was in such mourning that he ‘hated’ Ur and thus desired to move to Harran. Again we don’t know for certain this is true, but it certainly helps us to think of Bible ‘characters’ as real people, and that God moving and working in their lives was not separated from the normal events of life that all people experience in some fashion. God’s call on Abram would have been amplified and confirmed by these events, helping push Abram and his family in the right direction.

The idea that Abram would take his family and leave his homeland to live in a foreign, unknown land, does seem ‘crazy’ on the surface, but when we realize that moving to Canaan was accompanied by other circumstances (whether it is exactly like the Josephus account, or by other circumstances), we can see that God was preparing Abram in many ways, and he did not ‘cold call’ Abram out of the blue. It was something that I think would have been on Abram’s mind for years, and God’s call to Abram to move probably did not catch him by surprise. When Abram arrived in Canaan and God told him “To your offspring I will give this land”, he would have looked back and realized that a whole series of events led to this moment, and he would have seen God’s hand working amidst many disparate events.

I have also seen this play out in my own life, where I have had dreams lurking in the back of my mind that never seem to quite fade away; being intermittently stirred by a conversation here, a Bible passage there, a lingering thought emerging on aquiet walk, until the day when the dream actually begins to become real. To me, on the ‘inside’ of my faith journey, the events transpiring will make sense, but to those observing are often very surprised by them. This sense of preparation is how God helps us to know the difference between decisions made in His will and those that are, in fact, actually crazy. There is a sense of settled peace that comes when you can look back and see how the journey of your life has arrived at this particular moment, and how so many unrelated pieces now fit together. However, this level of discernment also requires a deep relationship with God to be able to distinguish what is truly a dream given by God and what is simply our own desire. I find that often the two are mixed together and it is only by making painful, sometimes embarrassing mistakes that I have learned to better perceive the voice of God. And this is why I love the story of Abram – we see him living out faith in real time, having moments of great triumph and moments of embarrassing failure. He doesn’t know how the story he is in will end; rather his faith is based on an ever deepening relationship with his God. And that is what I aspire to emulate.

Josephus’s writings on ancient Jewish thought, background, and history are now more accessible than ever!

Obeying God’s command to leave his own country, Abraham faced famine, war, and Pharaoh’s might before settling in the Promised Land. But why are we still discussing the faith of this desert nomad thousands of years later? Shedding fresh insight on Abraham’s story, Swindoll addresses that question and others in this compelling biography. 280 pages, hardcover from Tyndale.

View all posts by Kevin

2 thoughts on “Reflections on Genesis: Faith and the Calling of Abram”